He may be plastic but he scares Laila 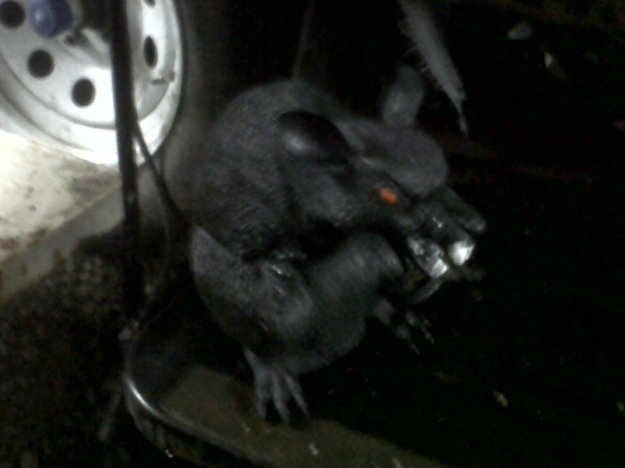 I hope you can see him, he kinda blends in with the shadows

I am sure I have mentioned how afraid of any kind of rodent I am, mice are one thing but then there are rats.

It seems where ever I’ve lived the last dozen or so years has had rats. I don’t know if that is because I have been living in dumps or if the rat population is growing but I am not happy about it.

As you all know I wasn’t happy about going into that trailer and as it turns out it was probably the worst mistake I’ve made since I went back to JC. I HAVE to get out of there SOON!! Not only is it cold, dang cold!!! We now have company or at least someone who wants to be company.

I think I’ve also told you my truck is a rust bucket. Well there was a gaping hole in the floor on the driver’s side that I almost lost a shoe through. I bought some of that expandable form stuff you spray to fill cracks, sprayed it in the hole and laid heavy black plastic over it while it was still wet and it worked pretty good. About a month ago I noticed the hole was back and getting bigger by the day. You know when you know some one has been in your home or in your stuff even if you don’t know? Well I had a feeling something had been in the truck and Kato did too. Every morning he couldn’t wait to get in the truck and he’d sniff every where and then settle down.

I had bought dog food for those nights we are late so the dogs wouldn’t have to go hungry and left it in the truck. I forgot to buy food one day and then remembered the food in the truck. I go get it and there is a huge hole chewed in the side of the bag. I tell myself, “don’t jump to conclusions, the bag could have gotten ripped some other way.”

Over time I have noticed papers left in the truck get chewed, one day it was my paper coffee cup, another day it was an envelope. Then I noticed the foam stuff I had sprayed on my truck floor was in tiny pieces on the ground where I usually park.

“This is not good” I think to myself.

Then one day we got home early and what do I see but what looks like a pretty big ficken rat running across the driveway and into the lean too where the trailer is parked. Kato went INSANE!!! So I let him out of the truck and all hell broke loose for about an hour but he never got it.

I have stopped having any food in the truck but I think its starting to pack my gloves out through the hole because one was outside the truck the other morning. Now I have been afraid that it will still be in the truck when we leave in the morning and then my fear is that its going to want to get out and I’m going to be driving when it runs over my feet.

Well I did a pick up the other day, got in the truck, threw my work gloves on the hump on the middle of the truck floor and we took off. I wasn’t a mile down the road when something hit my foot. I screamed, swerved all over the road, the dogs started barking and Kato started searching for the rat and then I realized my gloves had fallen off the hump onto my foot!!

It got really cold last week, like a layer of ice on my water cold. It was so cold I wore my winter boots, fuzzy warm winter coat and a sweater, sweatshirt, AND a wool shawl, two pairs of socks, jeans, and two shar-pei’s to bed and still woke up cold in the middle of the night. And we had a quilt over us and a portable heater cranked to its max. To try to heat that trailer is like trying to warm up the outdoors using a plug in heater. It ain’t going to happen. Plus any time you want to cook anything you have to unplug the heater or you blow the breaker and then you have to go out to the barn (where I suspect the rat lives) and flick the break switch. It was that cold for 5 days, and I was getting pretty depressed over the whole thing. There is nothing worse than being cold, I swear. You don’t sleep well when you are wearing your boots and coat and then add to it some one/thing scratching at the trailer door wanting in!! I kid you not!! We could hear it come up the steps and then it would scratch at the door. The dogs would go nuts. Some nights I let Kato out 3 or 4 times so he could try to kill it. Every night it was the same thing. 2 in the morning, 3 in the morning Laila is barking like crazy and Kato is shaking his head because he wants out. I didn’t get more than a couple hours sleep a night.

Then I got an idea. I had bought a dollar store black plastic rat last Halloween so I dug it out and put it on the steps to the trailer. For two nights now we have not had anyone knocking at the door!

I guess my rat must look pretty intimidating to the rat or whatever it is that wants in. Laila is afraid of it, she runs past it making sure to keep it in the corner of her eye at all times.

So that has been my latest drama/trauma.

Its gotten a bit warmer but even the dogs shiver so we end up trying to all sit in front of the heater and that doesn’t work because their little bodies soak up all the heat.

But the other morning I was so cold and so grumpy and cursing about how it isn’t fair. And then I thought about the people who don’t even have a trailer, or a heater or two puppies to snuggle up to and I thought about how miserable they must be. How horrible their nights must be and I felt pretty silly complaining.

Keep me in your prayers though please, that I find a place to park my trailer. I don’t think it would ever get so cold a person would die or anything but it sure taxes your positive outlook on life.

Thanks for listening. Hugs from Carrie
Are you following the Lady Witha Truck, you should be!

4 thoughts on “Knock Knock Who’s There?”