I go to work and life is good (most days), today I didn’t haul a load in and that always makes me uneasy.

I am finding it difficult to adjust my attitude with this new job. I am so used to needing to get a load in every day that if I don’t I automatically start to feel panic set in. I am also battling that little voice in my head (that sounds suspiciously like JC) that keeps saying, “They are going to figure out you’re a fraud and fire your ass”.  Just like JC had thought I was “perfect just the way I am” when he met me and then discovered the mysterious flaw of mine that made it impossible for him to live with me or love me.

Intellectually I know it was gas lighting, projection, and manipulation on his part but he planted the seeds of doubt and its really hard not to water them and let them grow.

Today I stayed home until almost 10 because I was doing work on the computer; making up a customer prospects list, a proposal and setting up my financial records; all things important to my job.

I made a few stops on the way into work, handed out business cards,  introduced myself etc all important to my job.

But I didn’t have tangible evidence (a load on the truck) that I had worked. My job description is to promote the company, get their name out there and customers coming through the gate, if I get some scrap in the process all the better. I have to keep reminding myself of that.

I also had to get Colin, our mechanic to look at my truck because it has developed a “clunk” since yesterday. Its no wonder when you see what it had to 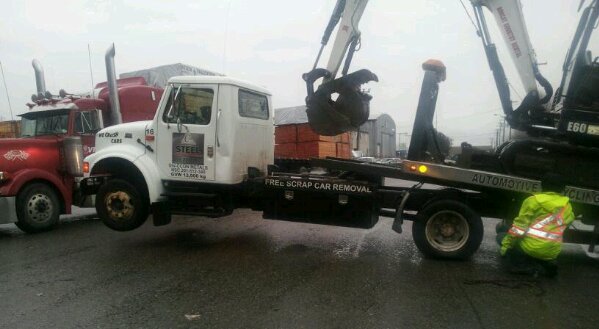 Notice the second picture and where the front wheels of my truck are!!

We had rented an excavator and my boss asked me to load it on my truck and return it. Fine and dandy until the guy drove it on to my truck and I tried to put the tilt deck back and it wouldn’t budge.

The person in the picture with the fluorescent rain coat on is Colin, our mechanic/genius who came to my rescue and got the excavator securely on the truck and the deck back where it belongs. Its all about weight distribution, keeping the excavator bucket over the cab of the truck and trying to keep as much weight as possible as far forward as possible.

I knew that, I’d watched JC load heavy equipment and knew it is not unusual for the front wheels to come off the ground but when you are the one working the levers and its your responsibility; its a little unnerving. Thank God for Colin!!

I was nervous about delivering it by myself but Colin reassured me I could handle it and I did. (I took the long way around getting there to avoid a HUGE hill because I was petrified I’d miss a shift and have to back down, cause a traffic jam etc)

I got it unloaded no problem but it how has a clunking sound. But that took up part of my day also and I feel I wasn’t productive. God how I hate self doubt!!

After JC and I split one of the things I missed most about him being in my life was he was just so damn knowledgeable and talented at so many things. But I have met JC’s match; not only is Colin just as talented as JC as a mechanic, welder, fabricator, but he is also talented at all household type repairs like carpet laying and tile setting. Whereas JC would start a job and never get it finished or do a 1/2 ass job and expect acolades for the good job he did. JC destroyed so many things “fixing” them I used to cringe if he ever even suggested he wanted to paint a room.

AND everyone likes Colin, including my dogs. Laila ripped a toe nail off and I went to Colin because I didn’t know what to do and he was so kind and gentle with her and took care of her, and then later messaged me to see how she was doing. The next day he messaged to say he had made the dogs special steps down from the truck so they wouldn’t hurt themselves again.

Every time I see him he makes me feel he’s happy to see me and the dogs. The really great thing about him is; we’re friends, he has a girlfriend so there is no danger I’ll get hurt.

I don’t know if I can describe how I feel but I am going try.

Before JC I never felt afraid, my life was pretty mundane and for lack of a better word; normal. After I met JC nothing was ever certain, the only certainty was that you couldn’t count on anything. So for over 12 years I have gone through life being afraid and the very person who caused all the fear and uncertainty was the person I was reliant on to keep me safe. After JC anyone I asked to help me wanted something in exchange (ie: sex)

I am not healed, I still find myself waiting for it to all fall apart, but time after time lately, good things
actually happen. Now, it I could just move out of this hell hole and have a place to call home I would feel I can leave the past behind me and live my life in peace.

I used to believe that good things happen to good people and if you work hard you are rewarded, that if you are a good friend you will have good friends, and that for the most part the world is fair and just. If you don’t believe in those things the world becomes pretty scary.

I think; what the truth is; is that the majority of people in the world are like me; just trying to get by best they can, but there are other people out there like JC who will take advantage, use, intimidate, manipulate, and destroy in order to get what they want.

A narcissist wants you to believe they are the only thing you can believe in. There is only one thing you need to believe and that is this:

A narcissist can not love, they don’t even love themselves and they seek to destroy anything good and pure because they can’t stand to see any one happy or have something they don’t have.

If you think you are in love with a narcissist run!! before they make themselves the centre of your world and you lose everything. When I say everything I am not talking possessions: although that is where they start. If you are hanging on because you will have nothing if you leave, take it from someone who knows; the narcissist will take so much more than “things”, things can be replaced. Peace of mind, feeling secure and safe, being loved and feeling lovable, friends, family, a home, pets; they are all things vital to living a happy life and the narcissist will strip you of everything before he discards you.