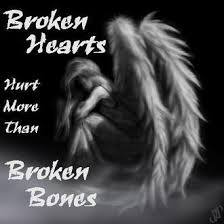 My son and I were talking while we were driving (me nonstop, it is my job to keep him awake) and I was telling him about the Oscar Pistorious case and how insane it is that he got off. My son has guns and he said too; who shoots through a closed bathroom door, when their girlfriend is not still in bed especially? He said something I hadn’t thought of before. A person is most vulnerable if they go looking for the intruder, which is true. If you think there is an intruder you are better off to pick a location where no one can come up behind you, position yourself and wait. That way you have the element of surprise on your side, you are ready and braced. Especially Pistorious, with no legs, he would have been much safer had he stayed in the bed and waiting until whoever was in the bathroom to came out and anyone who had taken any kind of gun training would have been taught that. ANYONE who has taken shooting lessons or ever even talked to someone who shoots guns knows you do not shoot blindly, like we have all heard in the movies, “Wait until you see the whites of their eyes and then shoot.”

Then I thought of a case locally where a guy got pulled over and the cops found a bunch of high power guns in the vehicle, ammunition, flack jackets, etc and there were two guys in the vehicle with him.The news report said that he told the police he was heading to check out property that was for sale in the area and he had no idea where the guns came from and he didn’t know who those two guys in the car with him were. He didn’t know what they were doing in the car or where they came from. The cops know he knows who was in the car with him and they know he knew there were guns in the car but what can they do if he denies it? If someone denies, denies, denies, you give up. What can you do? I remember having hard evidence, even pictures or letters in his own writing and the wospos would deny it. Either he would deny it or not remember doing it.

He didn’t remember joining dating sites or writing the woman in Africa and telling her he was bringing her to Canada. Eventually the other person ends up getting so frustrated at the total insanity of the situation they just give up the battle. The victim gives up arguing about other women, personal ads or whatever else the N is doing because they know they won’t get anywhere with the N., yet they refuse to walk away because they want the N to admit it. The victim starts to doubt themselves because the N is so adamant in his denial, a normal person, once cornered by hard evidence will buckle and confess, but not the N. He will get even more adamant he is innocent. We want to believe he wouldn’t do it, we don’t want to falsely accuse him, we want there to be some reasonable excuse or at the very least a promise he won’t do it again so we let it slide and tell ourselves, “If I ever catch him again it is over. Or we excuse his actions and tell ourselves it was not that bad but if he ever ……………… (fill in the blanks, with me I excused the personal ads because he wasn’t actually SEEING any of them but the first time I catch him dating one of them I am out of there). We start bargaining with our own sense of right and wrong, we start blurring the lines of our boundaries.

It’s one thing to catch your partner cheating and they admit it and you catch them again, you have a right to be angry and hurt, if they are all decent they say they are sorry even if they aren’t. But with a narcissist, they refuse to acknowledge what they have done, denying you your anger and hurt. Then on top of it all they criticize you for “always being angry” or “always crying” and the victim ends up feeling totally helpless and frustrated with no outlet for their emotions. In order to survive they bury their feelings and shut down.

I had shut down the last couple of months, I couldn’t react when he didn’t come home, his sister who was living with us would say, “Aren’t you mad? I would be furious!” and I just said,”There’s no point.” I had given up. Once you give up it is so much harder to recover because you have so much pain buried and as you heal more appears. It seems like you will never heal, just when you start to feel even a little bit normal something throws you back into the pit of despair and you feel you have made no progress whatsoever. Do not lose hope, you ARE making progress.

In self-preservation your mind blocked much of the abuse. Our minds can handle only so much pain and once it reaches its limit it stops acknowledging it, it is either that or go insane and have a total break down. As you heal your mind brings up the stuff you had buried so you can process it and heal that hurt. When that hurt is healed, more will surface for you to deal with. You will find every time this happens you feel a little lighter than before. The bouts of anxiety become fewer and less severe until you stop being triggered and you no long even look in the pit of despair, it is empty.

Human’s have an amazing ability to heal themselves, cut the human skin and it bleeds, a person can have a huge gaping hole or broken bone on their body and as long as it is cared for, kept sterile, and protected with a bandage or cast and allowed to heal before using it again (ie, not walking on a broken leg too soon) the body will rejuvenate the skin to cover the wound, a bone will knit together again, and in many cases the spot of the injury is even stronger than it was before and over time the scar even fades.But often times the healing process is painful also. Have you ever noticed that an injury is always more painful about 3 days after you get it, it hurts the most when it starts to heal, or if you get a cold or flue it always gets worse before it gets better? So it is with a broken heart, give your heart time to heal, know that it is going to hurt, healing hurts, growth hurts but you will heal if you are patient and take care of your heart, let it heal before you use it again and just like with a broken bone, take it easy for a while. You wouldn’t take your cast off your leg and go jogging, don’t jump into another relationship right away and expect your heart to withstand the pressure, it is going to be tender for a while and easy to rebreak.

Don’t deny your pain, don’t try to hide it, don’t listen to the people who tell you to “get over it” , “forget him and move on” ; to ignore or deny your pain will only bury it and it WILL resurface at some point, probably at a very inappropriate time so might as well deal with it now.

There is no shame in hurting, 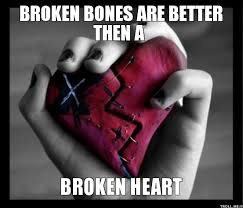 your friends may deny your pain,

YOU are the only one who knows

what your heart feels,