My Inner Chick had this post today and it got me thinking about the things that piss me off. I didn’t want to high jack her post so I thought I would do my own list of things that really annoy me, even make me angry. 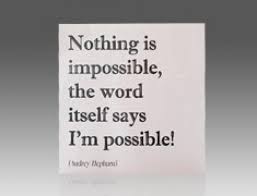 1. When someone says, “That is impossible, it can’t be done.” It can be some clerk in a store that is telling me that I can’t return something because it is store policy, or the banker who is telling me it is impossible to reverse the service charges because the computer automatically does it ( give me a serious break! you mean to tell me that the computer makes all the decisions and no one has the power to over ride those decisions? You can not write up a reversing entry? I worked in a bank and I have worked in offices for 30 thirty years, there is always a way if you want to take the time to do it. don’t give me that bullshit!) Years ago James and I were going through a drive through and he asked for a “swamp water” (you know, where they put a little bit of every kind of pop in the same cup) and the young server didn’t know what it was. He explained and the worker said that she could not do that. James asked why and she said that the boss told her she couldn’t. It just so happens we knew the boss and the boss has made him swamp water many times and walked past the window at the most opportune time and said “Hey guys, you want your swamp water?” and she proceeded to make his drink.

Almost anything is possible if you are willing to put in the time to find out how to do it and then do the work, don’t tell me it can’t be done, when the truth of the matter is, you just don’t want to make the effort.

2. When someone treats me like I am stupid or talks down to me. Don’t talk to me like I am an idiot and do not patronize me!! I have been around the block a few times and I am old enough to be your mother, I know what I am talking about and far from senile.

3. For the love of God, think before you speak and don’t feed me a bunch of crap that has worked on everyone else so you think it will work on me. We are back to “do your research” here. Like the guy from the funding committee who said he didn’t want to set me up for financial ruin, when I am on welfare! Hello!!??? why do you think I am applying for funding!

4, Being asked a ridiculous question when I make a mistake, like “Why the hell did you do that?” One time I was driving James’s truck and accidentally cut some guy off and James yelled at me, “Why the hell did you just cut that guy off?” I said, “I did it just to piss you off James, why else would I do it?”

5. When a man assumes that because I am a woman I am not able to drive a big truck, lift something heavy, or do any number of things a man can do. When I had my truck I used to hate it when a man would offer to back my truck into a tight location for me. It was one thing that James liked to brag and show off to the guys, how his woman could drive a truck better than most men, mind you he taught me how to drive.

6. Along the same vein is when people make assumptions about other people because of the way they look, where they live or age, nationality, without getting to know the person. We all do it to some degree but I really try to check myself when I catch myself doing it because so many times a person’s assumptions are far from the facts.

7. It really pisses me off when I see women back stabbing other women instead of supporting their gender. Catty bitches, and it usually involves a man.

8. People who judge others when they don’t have a flippin clue what that person has been through in their life, which is kinda related to many of the earlier things I listed but statements like, “I would never …….. (stay with an abusive man, comes to mind) ” have you been there? NO? then shut the F up!” People judge my son because he is covered in tattoos. “Have you looked at his tattoos, what they symbolize? Read his body, he is telling you something about himself. Do you know he has a university education, could be a pastor, a paramedic, and is the top in his field? Is a dedicated daddy and has lived through more shit in his short life than you will ever have to deal with? No. I didn’t think so.”

9. People who abuse animals or say, “It’s just a dog” why did you get a dog if you weren’t prepared to take care of it and love it? So you would have something to take your frustrations out on? I cried watching a video the other day about an elephant that was abused for 50 years and finally set free, heartbreaking. Heart breaking!! I won’t even say what I would like to do to people who do that kind of thing.
(I went to find a picture for animal abuse and was so disgusted by the pictures that came up I couldn’t post any of them)

8 thoughts on “Things That Make Me Angry-Just a Rant”