A little Friday levity. It is a sunny day here with predicted rain later so I will have to get outside with Stella early today but I had to share a skeleton in our closet.

Stella is a kleptomaniac, I hate to admit it, but ……. my sweet little girl is a bone thief. Forgive me I have shared this before, I am getting older and forget who I told what story sometimes.

At first I didn’t take it too seriously, Stella’s bone addiction that is; it seemed innocent enough, a social bone once in a while. She seemed to be able to chew a bone, bury it and forget about it for a day or two. But her addiction has changed into a full-blown, 24/7,  obsessive, addiction, she is up to two bones at one time for crumb sake!! and so young!!

Let me back track a bit. As you know Stella is a big girl, not fat; big-boned and as I have shared before, her forte is swimming and certainly not the high jump! A while back she jumped over the neighbors fence and ended up taking out the lattice-work on the top because she didn’t manage to get high enough. In essence Stella attempted to go OVER the fence but instead went THROUGH the fence. 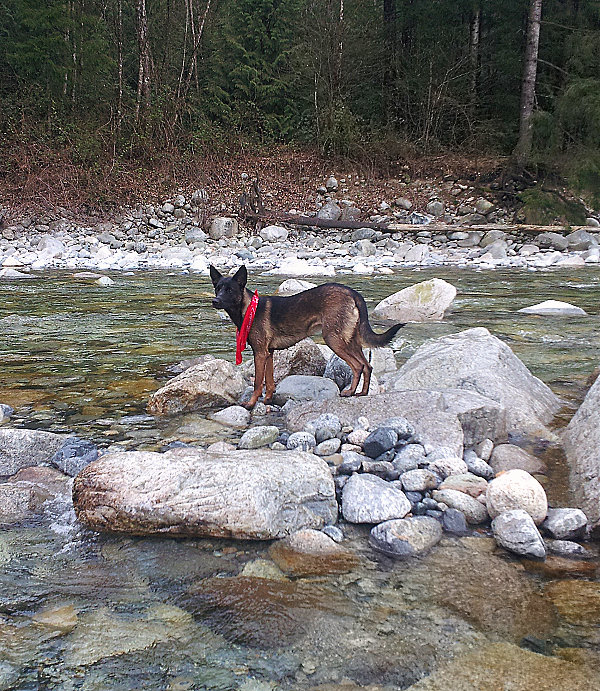 You can see that she is much slimmer than Stella and my goodness this dog is spring-loaded! She can jump that fence from a standing still position, whereas Stella took a running leap at it and took out the top foot of the fence.

Anyway, I digress. Back to the bone addiction.

My neighbor Mai buys bones from the butcher for the dogs, she always gives Stella a bone as well, so really Mai is the one who started this problem and I now refer to her as the “bone pusher”. Mai is caring for 2 Pugs and her daughter has a Pug, the Pugs gang up on Stella. Whenever Stella goes in the yard the pugs will dog pile her, biting at her ears, neck, tail, anything they can get their jaws around and Stella used to run under the picnic table or between my legs to get away from them.

Since Stella made a hole for herself in the fence she has been quite proud of the fact that she is now able to jump the fence and does it on a regular basis just to prove her agility. The other day I was sitting outside watching her play with GG and all of a sudden Stella was gone and the pugs were going crazy. I looked on Mai’s deck and there was Stella trying to make herself as small as she could, her tail tucked in, in a crouched position, with pugs hanging from her, darting around on the deck as if she was looking for something.

Next thing I know she comes sailing over the fence like a horse in a steeple chase, she cleared that fence by 6 inches easily and looked so graceful. I noticed she had something in her mouth and watched where she went. I followed to see what she was doing and there, in the grass, were 5 bones! every single bone Mai had given out the day before; in a neat little pile.

I let her out for a pee the other morning and she was taking an extra long time, when she came back with a bone in her mouth I knew where she had been. She must have 20 bones buried and hidden around the neighborhood. At any given time she can find a bone within a few feet of where she is. She knows where they all are and checks on them every time she goes outside. She hides them under my pillow, between the bed and the wall, under the door mat, in the couch. Every morning she greets me with a bone in her mouth as if to brag that she has a bone, this morning she had TWO bones in her mouth.

She is going to be some upset when we move and she realizes she has left all her bones behind but maybe it is a good thing. She will have to go cold turkey but this could develop into a huge problem. I envision people enjoying a tasty barbecue steak dinner and Stella sailing over the fence, grabbing their steak bones and making her escape before they know what happened.